This past weekend I had the amazing opportunity to attend Festival Hyères for my second time. In case you’re not familiar, it’s a ma-jor international fashion and photography competition that happens annually in the town of Hyères on the French Riviera (I finally escaped the rain in Paris). But an end-of-the-year student show this is not. Unless your school discovered Viktor & Rolf, Gaspard Yurkievich, Felipe Oliveira Baptista and Henrik Vibskov (to name a few) or had Yohji Yamamoto as the President of the Jury (for real). There’s a lot to talk about but right now I’m going to focus on the 10 designers featured in the fashion competition. The photos featured below are all my own and were taken at the fashion show and showroom presentations. Look for more coming soon on Fashion Snoops! 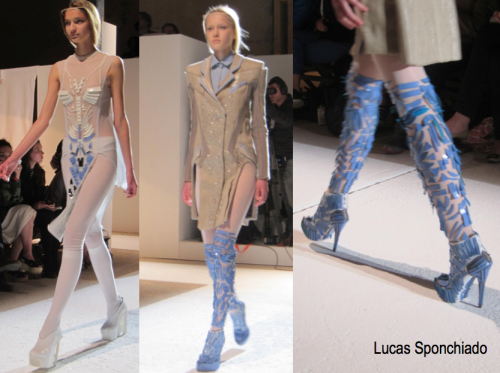 Lucas Sponchiado
Lucas Sponchiado graduated in 2011 from the École supérieure de La Cambre in Brussels and has worked with Balmain and Gaspard Yurkievitch. His collection “Out of Vacuum” is very much about metamorphosis in the sense that inspiration is taken from traditional English references and colonial India. The sheer lingerie aspect which appears on eveningwear happened entirely organically. Intricate embellishment on items like leggings make certain looks appear warrior-like while intricate pieced construction and cutouts appear on jackets. **Lucas Sponchiado is the recipient of the Public Prize from Palais du Tokyo and Villa Noailles. 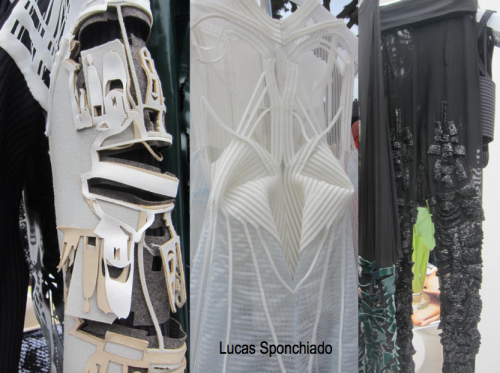 Narelle Dore http://www.narelledore.com
Astrallian designer Narelle Dore lives in Antwerp and graduated in 2008 from the Royal Academy of Fine Arts. Her collection “Women at Sitting Rock” emulates a synthesis between nature, crystals and feminine energy. Her mostly handmade garments feature woven threads, crocheted lace and macrame which are only enhansed by a beautiful color palette reflected throughout the collection and even on colored hair extensions. 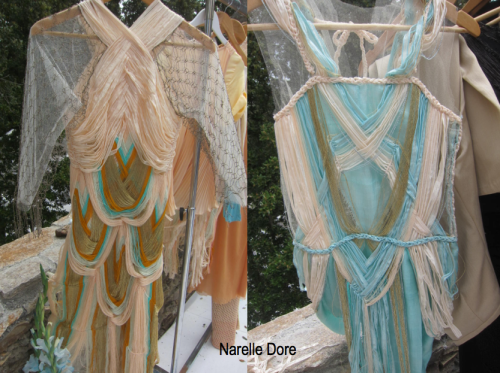 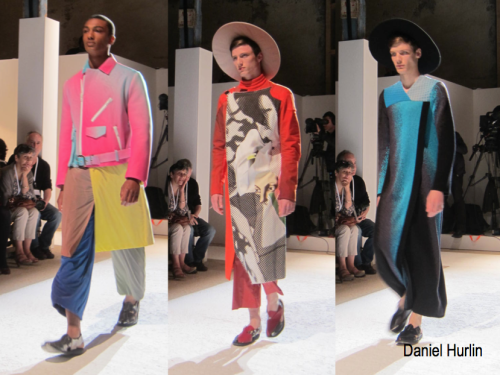 Paula Selby Avellaneda http://www.paulaselbyavellaneda.com
Argentinian designer Paula Selby Avellaneda is a graduate from the Royal Academy of Fine Arts in Antwerp and Institut Français de la Mode in Paris. The concept for her collection is based on the ability to control seasons and a resulting iceberg in Mongolia. Performance materials take center stage including plastic, rubber, quick-dry and reflective lycra. Couture-like quality remains alongside this futuristic collection with highlights including scale-like sequins and a holographic dress. 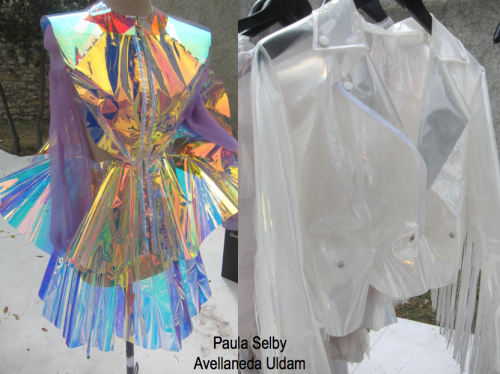 Jasmina Barshovi
Jasmina Barshovi is a graduate from HEAD in Geneva, Switzerland. Her collection “The Birds are silent” features a new sensual side to menswear, often involving transparency in the form of cotton voile and silk muslin. Shadowy prints in grey also add to the lightness of the collection. Active elements are also apparent from modified sweatshirts and tanks to must-have parkas.

Maxime Rappaz http://www.maximerappaz.com
Maxime Rappaz graduated in 2011 from HEAD in Geneva, Switzerland. This year he is currently working for Roberto Cavalli in Florence. His collection is a study in purity and takes inspiration from his own photographic research which identifies lines and monochrome surfaces. Minimalist neutral colors are enlivened with shocking neons and transparency while boxy accessories add a dose of irony on the runway. Up close, the garments feature intricate folds.

Ragne Kikas http://www.ragnekikas.com
Estonian designer Ragne Kikas is in the process of completing her university education in Hamburg. Her collection “Dress Code Defensive” takes inspiration from 15th and 16th Century armor which is translated into knitted garments. Set to an almost all-black palette, the garments are equally as striking on the body as they are close up. Intricate items are smocked, pleated and patterned bringing a truly new dimension to knitwear. **Ragne Kikas is the recipient of the Premiere Vision prize and the public prize from the city of Hyères.

Steven Tai http://www.steventai.co.uk
Canadian Steven Tai recently completed his studies at Central Saint Martin, and has already worked as an assistant for Bless, Viktor & Rolf and Stella McCartney. His collection is destined for bookworms with classical elements including button-down blouses met with exaggerated round waistbands that appear as sculptural appendages. Master craftsmanship comes through best with piles of fabrics that emulate stacks of books. **Steven Tai is the recipient of the Chloe Prize (more on that later)!

Kim Choong-Wilkins
Kim Choong-Wilkins is a graduate of the Royal College of Art and resides in London. His menswear collection “Dystopia” is defined as the opposite of Utopia and features a twist on classics, such as argyle patterns reinterpreted in metallic studs. Science fiction reference also makes an appearance with plastic overlays and chainmail knits. 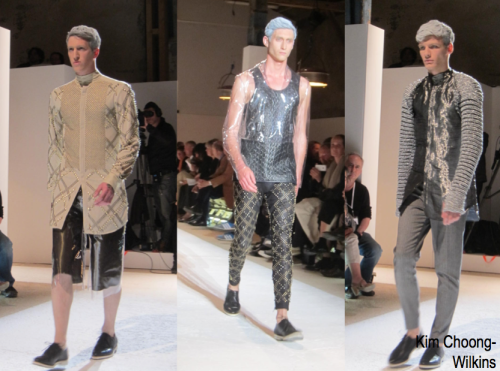